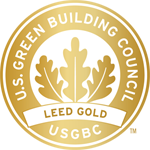 Welcome to Los Cubos.
A space full of creativity.

A building has been an emblematic, well-established, unique and recognisable part of Madrid architecture since its creation in 1974 by the architects Michel Andrault, Pierre Parat, Aydin Guvan and Alin Capieu. Following extensive refurbishments, it has been reinvented to stay at the forefront of office building design and continue making its mark on the Madrid skyline, into which its new facade gracefully merges.

6 rectangular prisms suspended above 16 columns, creating bright, open spaces according to brutalist architecture, to which the building belongs.

Los Cubos has a GLA of 19,265 sq m2 and 376 parking spaces. The occupancy rate is 1 person for each 7 sq m2 one of the best on the Madrid market, and it is planned to obtain LEED ® GOLD certification.

A building that can function independently or as a single corporate HQ.

LOS CUBOS IS AN INVITATION TO DISCOVER A NEW DIMENSION
MORE THAN JUST A FLOOR AREA, IT'S A SPACE IN WHICH TO TURN YOUR IDEAS INTO REALITY

The new self-supporting facade with a curtain wall, without any framework that can be seen from the outside, allows the building to enjoy a lot of natural light throughout the day. This leads to increased productivity and improves the wellbeing of all those working there.

The Los Cubos interior has comfortable, large and open spaces, enabling occupants to perform to the best of their abilities and offering them the highest security. It also features full acoustic and thermal insulation which will provide occupants with a high level of comfort.